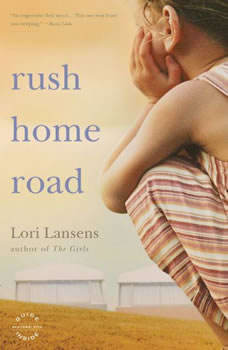 Lori Lansens became one of Canada’s most sought after writers more than a year before her internationally heralded first book, Rush Home Road, would see publication in April 2002. So immediately and passionately was her novel embraced that it was already front-page arts news back in April 2001. Knopf Canada was the first publisher to buy this extraordinary debut novel, but just before the 2001 London Book Fair, Little, Brown US bought the rest of the world rights for a major six-figure sum (for Rush Home Road and the author's yet-to-be-written second novel), and rights have now been sold in numerous countries.

The Globe and Mail reported the record-breaking news with full, front-page coverage, and Little, Brown International Rights Director Linda Biagi found herself talking of nothing else in London; she sold Rush Home Road to a further 9 territories with the manuscript still unedited. Biagi likened the book to some of the most important literary achievements of our time, saying, “It’s as if John Irving had written The Color Purple.” Louise Dennys, the Executive Publisher of Knopf Canada, describes it as “a novel of startling beauty and great heart that will immediately find a place within that small, special tribe of books beloved by readers the world over.”

The untold story of the descendants of the Underground Railroad

Heartbreaking and wise, Rush Home Road tells the life story of Adelaide Shadd, who finds redemption in old age, and Sharla, a five-year-old mixed race girl abandoned to Addy’s care by her white mother. Born in the first decade of the 20th century in Rusholme (inspired by the real town of Buxton), in southwestern Ontario, an all-black community settled by fugitive slaves, Addy Shadd is raped as a teenager and forced to flee the family home. She makes her way on foot to Detroit, where she becomes the housekeeper for an elderly man and his grown son, both of whom develop a crush on her. When misfortune strikes again, she sets off to make a new life for herself in Canada. Thrown off the train at Keating, not far from her birthplace, she meets and eventually marries the train porter, the wonderful Mose, with whom she has a daughter. But when tragedy strikes, Addy is left alone.

Now an old woman, she lives a quiet existence in a trailer park near Chatham. Her whole world changes when a young mother asks her to babysit her daughter, as it soon becomes clear that the mother is never coming back. Addy is glad of the company, but not sure if she’s up to the job of mothering this sweet, awkward five-year-old. Nor is she sure how much longer she’ll be around to do so. How she manages is part of the story of this brilliantly captivating novel.

Written with verve, grace and unflinching emotional acuity, Rush Home Road is an epic story that explodes our notions of identity, justice, and heroism, penetrating one of our darkest periods with profound insight and humanity. Addy Shadd is a protagonist like no other -- full of quiet, steely bravery and tenderness of heart. This spellbinding novel will leave no reader untouched.