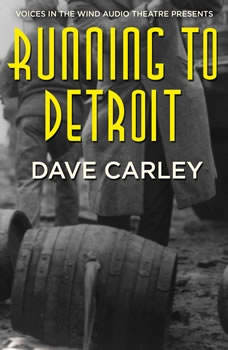 Meg and her mom Sandra are heading to Detroit to do a little cross-border shopping and take in a Tigers game. But Sandra's passport has expired, and they are turned back. An odd encounter on the Windsor waterfront leads them into a wild night of time travel, rum smuggling, a near drowning, hijackers, customs officials thirsty for bribes, and a chance encounter with controversial baseball legend Ty Cobb.The sound effects and music in this original radio drama will take you back to the 1920s-a time when "heading for the wild west" meant sneaking into Michigan with a boatload of Canadian contraband.

All the World a Stage
by Megan Lewis

All the world is a stage, Shakespeare tells us, and we are all its players. In fact, since the dawn of human history, we find evidence of theatre and performance. And throughout that history, this unique art form has flourished. In this engaging s...

Razzle Dazzle is a provocative, no-holds-barred narrative account of the people, money, and power that reinvented an iconic quarter of New York City, turning its gritty back alleys and sex shops into the glitzy, dazzling Great White Wayand bringing ...

From their ruined garage, Jeff Ward and Doug Bost have been producing award-winning short radio plays that have been featured on National Public Radio, Pacifica Radio, and Bavarian State Radio, as well as on local public radio stations across the co...

A Study in Wax
by Doug Bost; Jeff Ward

A Study in Wax From the classic script by Antony Ellis. Two men at an arctic station find out how deadly it can be to listen to somebody else's music all winter long. Script: Antony Ellis Production: Union Signal Music: S.A.M. Artwork: Jimmy Dean H...

Dream On
by Paul Ekert

This radio show is from The Wireless Theatre Company Collection, Vol. 1.Robert is having a dream about his late wife. The next night, there she is again, hauntingly familiar in the full personification of her monstrous personality. His current wife ...

Politics and Performance
by Megan Lewis

For most theatregoers today, Realism is the standard. We are accustomed to seeing characters on stage who walk, talk, and sound just like real people. Everyday speech is commonplace in theatrical scripts, as are stage sets that look and feel and sme...

A Christmas Carol
by Charles Dickens

Based on the classic story by Charles DickensIn this fully dramatized adaptation of Charles Dickens' A Christmas Carol, Michael Dick (Ebenezer Scrooge) and cast take you on an incredible journey into the supernatural as a miserly man comes to realiz...

Winner, 2017 APA Audie Awards - Audiobook of the YearLin-Manuel Miranda's groundbreaking musical, Hamilton, is as revolutionary as its subject: the poor kid from the Caribbean who fought the British, defended the Constitution, and helped to found t...

This radio show is from The Wireless Theatre Company Collection, Vol. 1.In this hilarious British comedy, a mismatched bunch of oddballs and geeks, along with a borderline-psychotic television presenter, venture to a haunted inn in England to record...