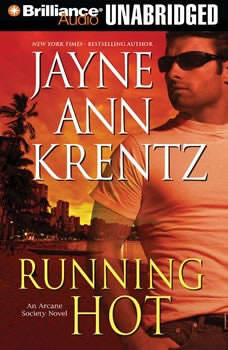 Ex-cop Luther Malone, lifelong member of the secretive paranormal organization known as the Arcane Society, is waiting to meet Grace Renquist. Hired as an aura-reading consultant in the quest for a murder suspect, she’s got zero field experience. She’s from tiny Eclipse Bay, Oregon. She’s a librarian, for heaven’s sake. As for Grace, she’s not expecting much, either, from Malone, who walks with a cane and isn’t so good with a gun. Nice résumé for a bodyguard. But even before they reach their hotel in Maui – where they’ll be posing as honeymooners – Grace and Luther feel the electric charge between them. Problem is, they need to remain vigilant day and night; because it soon becomes clear there’s more going on here. Rogue sensitives – operatives for the underground group Nightshade – are pouring into the luxury resort as if there’s a convention. Grace recognizes those dark spikes in their auras. And she understands how dangerous these people can be...especially with those para-hunters at their sides. As Grace knows all too well, if you don’t control your powers, your powers will control you.

Alyssa Locke is no stranger to dealing with danger. As team leader of the nation’s number one personal security company, Troubleshooters Incorporated, she’s seen more than her share of action, survived plenty of close calls, and holds he...

At exactly 7:30 p.m., Walter Pettibone arrived home to over a hundred friends and family shouting, "surprise!" It was his birthday. Although he had known about the planned event for weeks, the real surprise was yet to come. At 8:45 p.m., a woman wit...

It’s been years since the members of the Sisterhood first banded together, with the help of their mentor Charles Martin, to exact their own form of justice on those whose crimes had gone unpunished by the legal system. Now, back in the United ...

Virginia Dean wakes at midnight beside a dead body, with a bloody knife in her hand and no memory of the evening’s events. Dark energy, emanating from the mirrors lining the room, overpowers her senses. With no apparent way in or out, she̵...