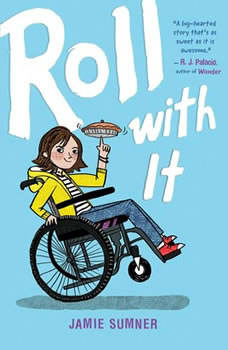 “A big-hearted story that’s as sweet as it is awesome.” —R.J. Palacio, author of Wonder In the tradition of Wonder and Out of My Mind, this big-hearted middle grade debut tells the story of an irrepressible girl with cerebral palsy whose life takes an unexpected turn when she moves to a new town.Ellie’s a girl who tells it like it is. That surprises some people, who see a kid in a wheelchair and think she’s going to be all sunshine and cuddles. The thing is, Ellie has big dreams: She might be eating Stouffer’s for dinner, but one day she’s going to be a professional baker. If she’s not writing fan letters to her favorite celebrity chefs, she’s practicing recipes on her well-meaning, if overworked, mother. But when Ellie and her mom move so they can help take care of her ailing grandpa, Ellie has to start all over again in a new town at a new school. Except she’s not just the new kid—she’s the new kid in the wheelchair who lives in the trailer park on the wrong side of town. It all feels like one challenge too many, until Ellie starts to make her first-ever friends. Now she just has to convince her mom that this town might just be the best thing that ever happened to them!