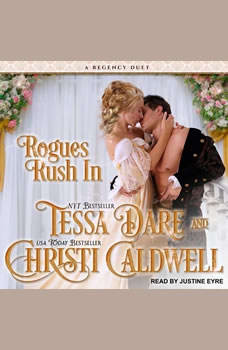 Rogues Rush In: A Regency Duet

New York Times and USA Today bestselling authors Tessa Dare and Christi Caldwell come together in this smart, sexy, not-to-be-missed Regency Duet! His Bride for the Taking: It's the first rule of friendship among gentlemen: Don't even think about touching your best friend's sister. But Sebastian, Lord Byrne, has never been one for rules. He's thought about touching Mary Clayton—a lot—and struggled to resist temptation. But when Mary's bridegroom leaves her waiting at the altar, only Sebastian can save her from ruin. By marrying her himself. His Duchess for a Day: It was never meant to be . . . That's what Elizabeth Terry has told herself while trying to forget the man she married—her once best friend. Passing herself off as a widow, Elizabeth has since built a life for herself as an instructor at a finishing school, far away from that greatest of mistakes. But the past has a way of finding you, and now that her husband has found her, Elizabeth must face the man she's tried to forget.