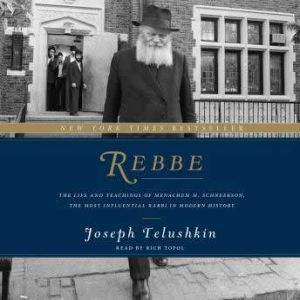 Rebbe: The Life and Teachings of Menachem M. Schneerson, the Most Influential Rabbi in Modern History

In this enlightening biography, Joseph Telushkin offers a captivating portrait of the late Rabbi Menachem Mendel Schneerson, a towering figure who saw beyond conventional boundaries to turn his movement, Chabad-Lubavitch, into one of the most dynamic and widespread organizations ever seen in the Jewish world. At once an incisive work of history and a compendium of Rabbi Schneerson's teachings, Rebbe is the definitive guide to understanding one of the most vital, intriguing figures of the last centuries.From his modest headquarters in Crown Heights, Brooklyn, the Rebbe advised some of the world's greatest leaders and shaped matters of state and society. Statesmen and artists as diverse as Ronald Reagan, Robert F. Kennedy, Yitzchak Rabin, Menachem Begin, Elie Wiesel, and Bob Dylan span the spectrum of those who sought his counsel. The Rebbe was the only rabbi ever to receive the Congressional Gold Medal, and to have an American national day, Education and Sharing Day, proclaimed in his honor. No one has succeeded him in his position. Nevertheless, twenty years after his death, his movement has doubled in size, spreading to more than eighty countries, and his impact resonates still. But what was the secret of the Rebbe's success and influence? What principles of leadership guided him? And how did he rally such extraordinary devotion and resolve?Rebbe explores Schneerson's overarching philosophies against the backdrop of treacherous history, revealing his clandestine operations to rescue and sustain Jews in the Soviet Union, and his critical role in the expansion of the food stamp program throughout the United States. More broadly, it examines how he became in effect an ambassador for Jews globally, and how he came to be viewed by many as not only a spiritual archetype but a savior. Telushkin also delves deep into the more controversial aspects of the Rebbe's leadership, analyzing his views on modern science and territorial compromise in Israel, and how in the last years of his life, many of his followers believed that he would soon be revealed as the Messiah, a source of contention until this day.Epic, intimate, and masterfully told, Rebbe is the definitive work on a monumental and multifaceted leader, written by one of today's most prominent and respected Jewish scholars.