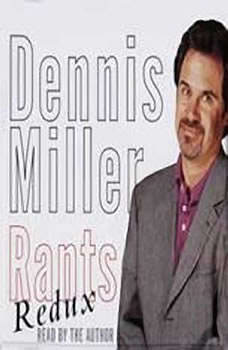 Why are Americans so disinterested in politics? Because we can be. Democracy is voluntary. And our lack of interest hasn't happened overnight. It can be traced directly back to our ever-decreasing attention spans. We need anything politically important rationed out like Pez-small, sweet, and coming out of a funny plastic head.

Why has flying in this country, especially boarding the plane, turned into this tedious Bataan death march with American Tourister overnight bags? And when did flight attendants get so cranky?

Who do we find ourselves locked in this pointless pas de doo-doo over something called "arts funding?" The federal tab involved here is a lousy 500 million dollars. One-fifth the national budget! Less than the money spent on 1-900 calls from Air Force One.

Mothers, immigration, marriage, parenthood, sports, political correctness, and our general attitudes toward each other-all are equally worthy of Dennis Miller's close inspection and ridicule. What's really going on in this country? Ask Dennis Miller. Or don't ask. He'll tell you anyway. Not that he really wants to go off on another rant. Remember, it's only his opinion, he could be wrong.