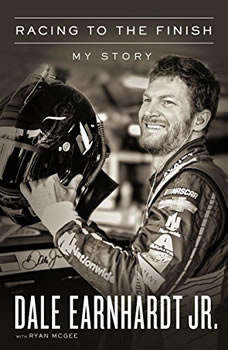 Racing to the Finish: My Story

Dale Earnhardt Jr.’s only authorized book revealing the inside track on his final year of racing and retirement from the driver’s seat.

“Time was running out on my charade… My secrets were about to be exposed to the world.”

It was a seemingly minor crash at Michigan International Speedway in June 2016 that ended the day early for Dale Earnhardt Jr. What he didn’t know was that it would also end his driving for the year. He’d dealt with concussions before, but concussions are like snowflakes, no two are the same. And recovery can be brutal, and lengthy.

When NASCAR star Dale Earnhardt Jr. retired from professional stock car racing in 2017, he walked away from his career as a healthy man. But for years, he had worried that the worsening effects of multiple racing-related concussions would end not only his time on the track but his ability to live a full and happy life.

Torn between a race-at-all-costs culture and the fear that something was terribly wrong, Earnhardt tried to pretend that everything was fine, but the private notes about his escalating symptoms that he kept on his phone reveal a vicious cycle: suffering injuries on Sunday, struggling through the week, then recovering in time to race again the following weekend. For the first time, he shares these notes and fully reveals the physical and emotional struggles he faced as he fought to close out his career on his own terms.

In this candid reflection, Earnhardt opens up about his frustration with the slow recovery, his admiration for the woman who stood by him through it all, and his determination to share his own experience so that others don’t have to suffer in silence. Steering his way to the final checkered flag of his storied career proved to be the most challenging race and most rewarding finish of his life.

The Impossible Climb
by Mark Synnott

"One of the most compelling accounts of a climb and the climbing ethos that I've ever read." --Sebastian JungerThe Impossible Climb climaxes with Alex Honnold's unprecedented, almost unimaginable feat: a 3,000-foot vertical climb up El Capitan in Yo...

An intriguing blend of science and sports that explores how some of the worlds greatest athletes are utilizing the last frontier of performance-enhancing technology—the mental mapping and engineering of their own brains—for peak perform...

Master your game from the inside out!With more than 800,000 copies sold since it was first published thirty years ago, this phenomenally successful guide has become a touchstone for hundreds of thousands of people. Not just for tennis players, ...

From the winningest soccer coach ever, best known for 27 triumphant years with Manchester United, comes the book that decodes the key tools he used to deliver sustained success on and off the field. After an astonishing career-first in Scotland, ...

In I'M HERE TO WIN, Chris "Macca" McCormack opens his playbook and reveals everything it takes-mind, body, and spirit-to become a champion. Now he shares the story of his triumphs and the never-say-die dedication that has made him the world's most ...

On a foggy July evening in 1956, the Italian cruise liner Andrea Doria, bound for New York, was struck broadside by another vessel. In eleven hours, she would sink nearly 250 feet to the murky Atlantic Ocean floor. Thanks to a daring rescue operatio...

A breakthrough program for triathletes--beginner, intermediate, and advanced--showing how to balance training intensity to maximize performance--from a fitness expert and elite coachCutting-edge research has proven that triathletes and other endur...

NEW YORK TIMES BESTSELLERHistory was made at the Belmont Stakes in Summer 2015 when American Pharoah won the Triple Crown title, the first racehorse to achieve the momentous feat since Affirmed in 1978. Pharoah was the crowd favorite, as spectator...