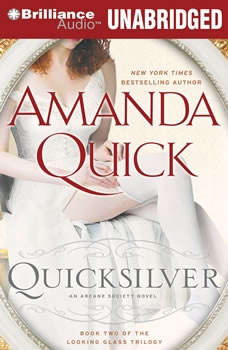 Virginia Dean wakes at midnight beside a dead body, with a bloody knife in her hand and no memory of the evening’s events. Dark energy, emanating from the mirrors lining the room, overpowers her senses. With no apparent way in or out, she’s rescued by a man she’s met only once before, but won’t soon forget….Owen Sweetwater inherited his family’s talent for hunting the psychical monsters who prey on London’s women and children, and his investigation into the deaths of two glass-readers has led him here. The high-society types of the exclusive Arcane Society would consider Virginia an illusionist, a charlatan, even a criminal. But Owen knows better. Virginia’s powers are real—and so is the power she exerts over him simply with her presence. And if her abilities can be relied upon in the midst of great danger, they just might be the key to his investigation.

The Uninvited
by Heather Graham

1777: In the throes of the Revolutionary War, Landon Mansion is commandeered by British Lord “Butcher” Bedford. He stabs Lucy Tarleton — who spurned his king and his love — leaving her to die in her father’s arms. Now:...

The Night Is Watching
by Heather Graham

The Old West town of Lily, Arizona, is home to the Gilded Lily, a former theater…and bawdy house. These days, it offers theatrical productions geared to tourists, but the recent discovery of a skull, a real skull, among the props and costumes ...

Everything is different underground. Just ask the residents of Harmony, a futuristic world where alien catacombs can lead you astray –- and where psychic senses spark out-of-this-world passion... Reporter Sierra McIntyre's stories on Crystal ...

Canyons of Night
by Jayne Castle

Growing up on Rainshadow, Charlotte Enright knew better than to ever go into the Preserve, until that one fateful night with Slade Attridge — a night neither of them would forget. Now, fifteen years later, both have returned to the island: Ch...