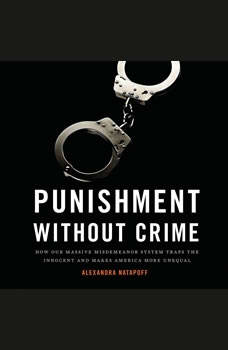 Punishment Without Crime: How Our Massive Misdemeanor System Traps the Innocent and Makes America More Unequal

A revelatory account of the misdemeanor machine that unjustly brands millions of Americans as criminalsPunishment Without Crime offers an urgent new interpretation of inequality and injustice in America by examining the paradigmatic American offense: the lowly misdemeanor. Based on extensive original research, legal scholar Alexandra Natapoff reveals the inner workings of a massive petty offense system that produces over 13 million cases each year. People arrested for minor crimes are swept through courts where defendants often lack lawyers, judges process cases in mere minutes, and nearly everyone pleads guilty. This misdemeanor machine starts punishing people long before they are convicted; it punishes the innocent; and it punishes conduct that never should have been a crime. As a result, vast numbers of Americans -- most of them poor and people of color -- are stigmatized as criminals, impoverished through fines and fees, and stripped of drivers' licenses, jobs, and housing.For too long, misdemeanors have been ignored. But they are crucial to understanding our punitive criminal system and our widening economic and racial divides.A Publishers Weekly Best Book of 2018

Nominated for the 49th NAACP Image Award for Outstanding Literary Work (Nonfiction)A 2017 Washington Post Notable Book A Kirkus Best Book of 2017“Butler has hit his stride. This is a meditation, a sonnet, a legal brief, a poetry slam and a dis...

During the bleak winter of 1692 in the rigid Puritan community of Salem Village, Massachusetts, a group of young girls began experiencing violent fits, allegedly tormented by Satan and the witches who worshipped him. From the girls' initial denounci...

Anatomy of Injustice
by Raymond Bonner

From Pulitzer Prize winner Raymond Bonner comes the gripping story of a grievously mishandled murder case that put a twentythreeyearold man on death row. In January 1982, an elderly white widow was found brutally murdered in the small town of Green...

A man accused of a murder he didn't commit languishes on death row. A crusading lawyer is determined to free him. This powerful book reads like a compelling legal thriller with one crucial difference: Justice is not served in the end.In 1986, Kris M...

On its initial publication in 1998, John R. Lott's More Guns, Less Crime drew both lavish praise and heated criticism. More than a decade later, it continues to play a key role in ongoing arguments over gun-control laws: despite all the attacks by g...

Courtroom 302 is the fascinating story of one year in Chicago's Cook County Criminal Courthouse, the busiest felony courthouse in the country. Here we see the system through the eyes of the men and women who experience it, not only in the courtroom ...

In 1982, Sister Helen Prejean became the spiritual advisor to Patrick Sonnier, the convicted killer of two teenagers who was sentenced to die in the electric chair of Louisiana’s Angola State Prison. In the months before Sonnier&rsqu...

The Brain Defense
by Kevin Davis

Called “the best kind of nonfiction” by Michael Connelly, this riveting new book combines true crime, brain science, and courtroom drama.In 1991, the police were called to East 72nd St. in Manhattan, where a woman's body had fallen from ...