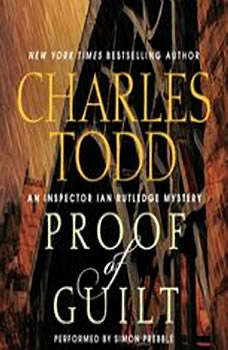 Scotland Yard's Ian Rutledge must contend with two dangerous enemies in this latest complex mystery in the New York Times bestselling seriesLondon, summer 1920. An unidentified body appears to have been run down by a motorcar and Ian Rutledge is leading the investigation to uncover what happened. While the signs point to murder, vital questions remain: Who is the victim? And where, exactly, was he killed?One small clue leads Rutledge to a firm built by two families, famous for producing and selling the world's best Madeira wine. Lewis French, the current head of the English enterprise, is missing. But is he the dead man? And does either his fiancée or his jilted former lover have anything to do with his disappearance—or possible death? What about his sister? Or the London office clerk? Is Matthew Traynor, French's cousin and partner who heads the Madeira office, somehow involved?The experienced Rutledge knows that suspicion and circumstantial evidence are not proof of guilt, and he's going to keep digging for answers. But that perseverance will pit him against his supervisor, the new acting chief superintendent. When Rutledge discovers a link to an incident in the French family's past, the superintendent dismisses it, claiming the information isn't vital. He's determined to place the blame on one of French's women despite Rutledge's objections. Alone in a no-man's-land rife with mystery and danger, Rutledge must tread very carefully, for someone has decided that he, too, must die so that cruel justice can take its course.