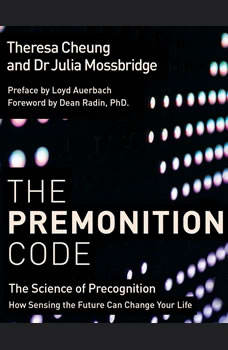 Premonition Code, The: The Science of Precognition, How Sensing the Future Can Change Your Life

Bestselling author Theresa Cheung joins forces with cognitive neuroscientist Julia Mossbridge, PhD, Director of the Innovation Lab at The Institute of Noetic Sciences (IONS), to reveal revolutionary new research showing that sensing the future is possible. They also provide practical tools and techniques you can use to develop your own powers of precognition. Precognition is the scientific name for the knowledge or perception of the future, obtained through extrasensory means. Often called premonition, precognition is the most frequently reported of all extrasensory perception (ESP) experiences, occurring most often in dreams. It may also occur spontaneously in waking visions, auditory hallucinations, flashing thoughts entering the mind, the sense of knowing, and physiological changes. Combining science and practice, The Premonition Code examines precognition thoroughly, revealing the most common premonitions that people experience, experimental tools for cultivating precognition, and more. A supplemental PDF is included with this audiobook.

Parapsychology
by Centre of Excellence

The Parapsychology Audiobook deals with the investigation of paranormal and psychic phenomena in a structured approach to study anomalous phenomena that defy explanation.