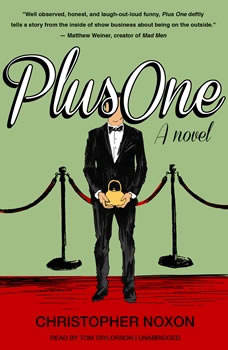 The hilarious tale of a newly full-time dad and awards-show plus one whose TV-writer wife has hit the big time Christopher Noxons debut novel Plus One is a comedic take on breadwinning women and caretaking men in contemporary Los Angeles. Alex Sherman-Zicklin is a mid-level marketing executive whose wifes fourteenth attempt at a television pilot is produced, ordered to series, and awarded an Emmy. Overnight, shes sucked into a mad show-business vortex and hes tasked with managing their new high-profile Hollywood lifestyle. He falls in with a posse of Plus Ones, men who are married to women whose success, income, and public recognition far surpasses their own. What will it take for him to regain the foreground in his own life?