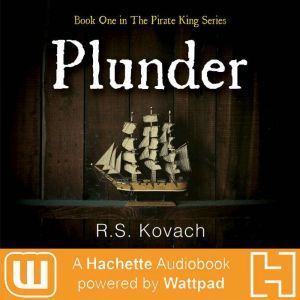 PLUNDER is a new release from Hachette Audiobooks: Powered by Wattpad - an innovative collaboration between Hachette Book Group and Wattpad. Your favorite online stories, now available in your headphones!After pirates kidnap seventeen-year-old Ana in a case of mistaken identity, the orphaned housemaid prepares for the worst. Instead, playing the wholesome daughter of a Spanish admiral among rag-tag buccaneers becomes the least of her concerns. Battles, a shipwreck, mutiny, and most unexpectedly, love are what really turn her world upside down. When the truth threatens to end Ana's adventures, it's the secrets of the dashing Alestair Kincade, Pirate King of the Caribbean, that prove to be the most dangerous. Ana will need to use her wits and charm to not only stay off the gallows, but also to avoid a fate she now considers to be worse than death: being sent home to Panama to a hopeless future.