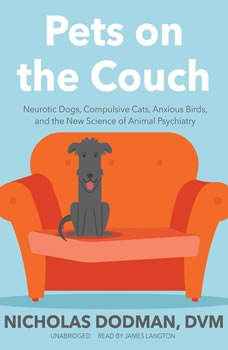 The pioneering veterinarian and author of the New York Times bestseller The Dog Who Loved Too Much recounts his uniquely entertainingand poignantstories of treating animals for all-too-human problems as he reveals his amazing breakthroughs with the new science of One Medicine. The Oliver Sacks of animal brains, Dr. Nicholas Dodman is an internationally renowned veterinarian and research scientist who wrote one of the first popular books to recognize the complex emotional lives of dogs and to reveal innovative ways to help them, including with Puppy Prozac. Now Dr. Dodman once again breaks new ground with the practice of One Medicine, the profound recognition that humans and other animals share the same neurochemistry, and that our minds and emotions work in similar ways. Racehorses with Tourettes syndrome, spinning dogs with epilepsy, cats with obsessive-compulsive disorder, feather-plucking parrots with anxiety, and a diffident bull terrier with autismthese astonishing cases were all helped by One Medicine, which emphasizes the similarities rather than differences between animals and humans. Inspiring, sometimes heartbreaking, and utterly fascinating, Pets on the Couch demonstrates how what we share with our animals can only lead us to a greater appreciation for themand for our mutual bonds.