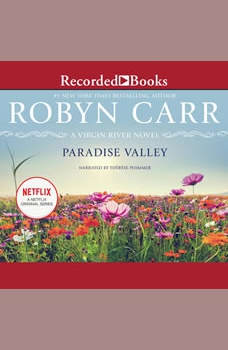 Bestselling author Robyn Carr pens a captivating tale from her Virgin River series in Paradise Valley. This entry in the series about a small California community is a heartwarming lesson in second chances, rekindled love and new hope. Life is forever evolving for the townsfolk of Virgin River. Among them is Rick Scudderwho joined the Marine Corps with high hopes, but left with a broken spirit and a shattered body. Pushing away everyone close to him, he forsakes the help of his surrogate father Jack and his longtime girlfriend Liz. Now Rick must find the strength to let Liz, whos never given up on him, back into his heart. A continuation of the storylines introduced in Second Chance Pass and Temptation Ridge, Paradise Valley is filled with stirring plot threads and unforgettable characters. Narrator Therese Plummer perfectly captures the essence of this engrossing small-town saga.