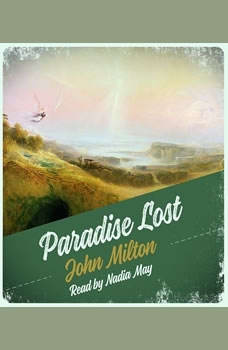 Of Man's first disobedience and the fruit // Of that forbidden tree whose mortal taste // Brought death into the world and all our woe, // With loss of Eden, till on greater Man //Restore us and regain the blissful seat // Sing, Heavenly Muse... // Thus begins the epic poem, considered the greatest in the English language, as John Milton seeks to “justify the ways of God to men” through relating the story of Satan’s rebellion in Heaven, the deception and fall of Man, and the presaged event of Redemption through Jesus, the Son of God…the “Second Adam.” // An English cleric with a classical education, Milton lost his eyesight in 1652, and thus the story was largely dictated by the blind poet, lending a certain quality of the ancient oral epics, which only serves to enhance the telling of the tale. Weaving classical mythology with a deep knowledge and reference to Scripture, Milton's genius for narrative unfolds what his biographer, Samuel Johnson, called his "peculiar power to astonish." // Nadia May has narrated over five hundred audiobooks and has earned the prestigious AudioFile Golden Voice award, as well as fourteen Earphone awards. She is an accomplished film, TV, and theater actress. Wanda’s native British voice complements her graduate education in English Literature from UC Berkeley to make her delivery of John Milton’s Paradise Lost engaging and nuanced.

The Gnostic Gospels
by Elaine Pagels

The Light Princess
by George MacDonald

The Holy Rule of St. Benedict
by Saint Benedict of Nursia

The Golden Key
by George MacDonald

The Great Emergence
by Phyllis Tickle

A Hobbit, a Wardrobe, and a Great War...
by Joseph Loconte