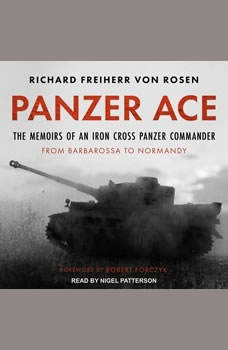 Panzer Ace: The Memoirs of an Iron Cross Panzer Commander from Barbarossa to Normandy

Richard Freiherr von Rosen was a highly decorated Wehrmacht soldier and outstanding panzer commander. After serving as a gunlayer on a Pz.Mk.III during Barbarossa, he led a Company of Tigers at Kursk. Later he led a company of King Tiger panzers at Normandy and in late 1944 commanded a battle group (12 King Tigers and a flak Company) against the Russians in Hungary in the rank of junior, later senior lieutenant (from November 1944, his final rank). Only 489 of these King Tiger tanks were ever built. They were the most powerful heavy tanks to see service, and only one kind of shell could penetrate their armor at a reasonable distance. Every effort had to be made to retrieve any of them bogged down or otherwise immobilized, which led to many towing adventures. The author has a fine memory and eye for detail. His account is easy to listen to and not technical, and adds substantially to the knowledge of how the German Panzer Arm operated in the Second World War.