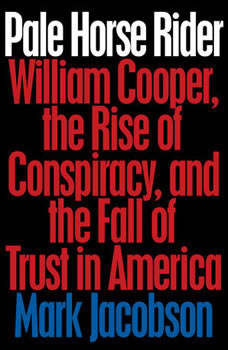 Pale Horse Rider: William Cooper, the Rise of Conspiracy, and the Fall of Trust in America

We are living in a time of unprecedented distrust in America: Faith in the government is at an all-time low, and political groups on both sides of the aisle are able to tout preposterous conspiracy theories as gospel, without much opposition. “Fake news” is the order of the day. This book is about a man to whom all of it points, the greatest conspiracist of this generation and a man you may not have heard of.

A former U.S. naval intelligence worker, Milton William Cooper published his manifesto Behold a Pale Horse in 1991. Since then it has gone on to sell hundreds of thousands of copies, becoming the number-one bestseller in the American prison system. (Bookscan lists sales at 289,000 since 2005.) According to Behold a Pale Horse, JFK was assassinated—because he was about to reveal that extraterrestrials were about to take over the earth—by his driver, an alien himself; AIDS is a government conspiracy to decrease the population of blacks, Hispanics, and homosexuals; and the Illuminati are secretly involved with the U.S. government to manage relationships with extraterrestrials. Cooper died in a shootout with Apache County police in 2001, one month after September 11, in the year in which he had predicted catastrophe.

Many of Cooper’s conclusions were driven by personal demons and a highly creative connection of dots, and yet they have shaped much of the fabric of American life in the past few decades. Terry Nichols, Timothy McVeigh’s cohort in the Oklahoma City bombing, was a fan, and Behold a Pale Horse has great appeal among right-wing radicals. On the other hand, the book transcends class and race barriers: It is read primarily by poor blacks in prison and appeals to people who acutely feel that society is fixed against them. It has inspired numerous hip-hop groups and continues to do so.

In Pale Horse Rider, journalist Mark Jacobson not only tells the story of Cooper’s fascinating life but also provides the social and political context for American paranoia. Indeed, with the present NSA situation and countless other shadowy government dealings often in the news, aren’t we right to suspect that things may not be as they seem?