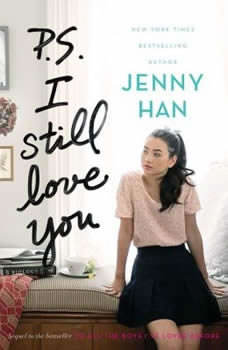 P.S. I Still Love You

Series: Sequel to All the Boys I've Loved Before

Given the way love turned her heart in the New York Times bestselling To All The Boys Ive Loved Before, which SLJ called a lovely, lighthearted romance, its no surprise that Lara Jean still has letters to write. Lara Jean didnt expect to really fall for Peter. She and Peter were just pretending. Except suddenly they werent. Now Lara Jean is more confused than ever. When another boy from her past returns to her life, Lara Jeans feelings for him return too. Can a girl be in love with two boys at once? In this charming and heartfelt sequel to the New York Times bestseller To All the Boys Ive Loved Before, we see first love through the eyes of the unforgettable Lara Jean. Love is never easy, but maybe thats part of makes it so amazing.

It's Not Summer Without You
by Jenny Han

Belly was ecstatic when Conrad, the son of her mom’s best friend and the boy she’d loved for years, finally kissed her. But when Conrad’s mom dies, he withdraws from everyone and eventually disappears completely. Not sure where to...

A romantic comedy that’s “a good choice for fans of John Green” (Booklist) about high school, heartbreak, and having all the answers.What if the secrets of dating and love were revealed in one simple formula? That’s the tanta...

From YouTube sensation Zoella comes a debut coming-of-age novel that perfectly captures what it means to grow up and fall in love in today’s digital world. Girl Online is the first book to be published by Keywords Press, an imprint under Simon...

Between the Lines
by Tammara Webber

When Hollywood It Boy, Reid Alexander, arrives on location to shoot his next movie, his goals are the same as always: film another blockbuster hit, and enjoy his celebrity status to the fullest while doing so. His costar is a virtual unknown with wh...

What My Mother Doesn't Know
by Sonya Sones

My name is Sophie.This book is about me.It tells the heart-stoppingly riveting story of my first love.And also of my second.And, okay, my third love, too.It’s not that I’m boy crazy.It’s just that even though I’m almost fifte...

New York Times bestselling author Ellen Hopkins makes her Simon & Schuster Audio debut with the young adult novel, Perfect. Everyone has something, someone, somewhere else that they’d rather be. For four high-school seniors, their goals of per...

The third novel in the New York Times bestselling Girl Online series by the award-winning YouTuber and blogger Zoe “Zoella” Sugg.Penny’s life is back to normal. As Penny starts the school year she’s ready to face the world...

16-year-old Miranda Merchant is great at science...and not so great with boys. After major drama with her boyfriend and (now ex) best friend, she's happy to spend the summer on small, mysterious Selkie Island, helping her mother sort out her late gr...