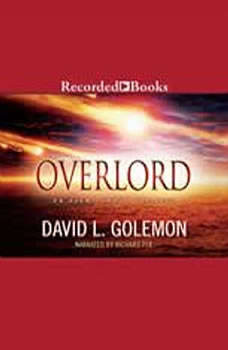 In Overlord, the stunning conclusion to the trilogy within the Event Group series that began with Event and continued with Legacy (fans' favorite titles), a time of war is upon humanity. The plans of a million years are finally ready for what has always been coming—Armageddon. Finally, the first move is set in motion and the assassinations begin, eliminating the leadership and consolidating military control of the seas and airspace of the world’s most powerful nations. Only one element in the arsenal of the world can possibly give the Earth a fighting chance at survival---a tiny being that has already saved the world once in the Arizona desert is now called upon to outthink his former masters. The one entity on the planet that refuses to accept the inevitable defeat of humankind, The Event Group, is suffering from losses of military personnel and being torn apart by internal conflict. The Group also faces a threat that may be far more dangerous to Earth’s survival than the attacks from deep space--their old enemies have returned to take revenge and the worst fears of Department 5656 are realized—a breach in security allows intruders to get at the secrets inside the complex in Nevada. As the war wages on, countries fall, nations fight to the last man, and the fate of planet depends on a few good men and women in this action-packed thrill ride from New York Times bestselling author David Golemon.