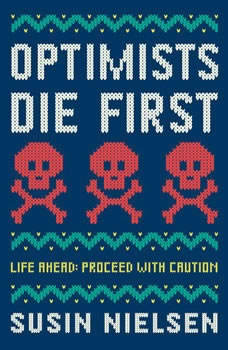 Award-winning author Susin Nielsen has written a laugh-out-loud and heartrending novel for fans of Robyn Schneider’s Extraordinary Means and Cammie McGovern’s Say What You Will.

Sixteen-year-old Petula de Wilde is anything but wild. A former crafting fiend with a happy life, Petula shut herself off from the world after a family tragedy. She sees danger in all the ordinary things, like crossing the street, a bug bite, or a germy handshake. She knows: life is out to get you.

The worst part of her week is her comically lame mandatory art therapy class with a small group of fellow misfits. Then a new boy, Jacob, appears at school and in her therapy group. He seems so normal and confident, though he has a prosthetic arm; and soon he teams up with Petula on a hilarious project, gradually inspiring her to let go of some of her fears. But as the two grow closer, a hidden truth behind why he’s in the group threatens to derail them, unless Petula takes a huge risk. . .

“A poignant exploration into the nuances of healing.” —Quill and Quire, Starred

The Silence of Murder
by Dandi Daley Mackall