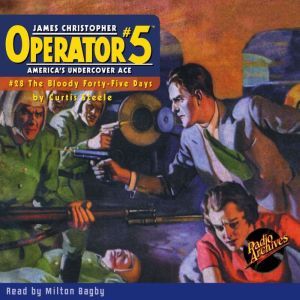 What has become known as the War and Peace of the Pulps commenced with the searing novel, Deaths Ragged Army, which appeared in the July, 1936 issue of Operator #5 magazine. The legions of Emperor Maximilian swept in and took over New England, initiating the Second War of Independence. Jimmy Christopher and his friends and allies in the Intelligence Service were enlisted in a desperate undertaking to hurl back to Europe the forces of the Purple Emperor. The legendary Purple Invasion series had begun and lasted an amazing 13 installments. In order to enjoy the unfolding storyline, it's best to start with Deaths Ragged Army and read sequentially through to The Siege that Brought the Black Death. These 13 novels represent the most daring and unique departure ever in this kind of pulp magazine. Operator #5 and the Purple Invasion series returns in vintage pulp tales, reissued for todays readers in electronic format.