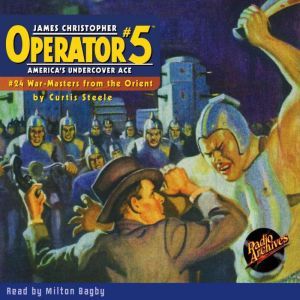 Operator #5 #24 War-Masters from the Orient

A brawny coolie from the filthy waterfront of Hong Kong was Emperor of Asia and master of the vast reaches of Russia. Armed with mysterious new weapons which made the bravest man craven, he marched ruthlessly to conquer the world, and to win the proud daughter of the Muscovite nobility who scorned his amorous advances... Jimmy Christopher Operator #5 of the United States Intelligence had given America more than enough warning to prepare for the barbaric, invading hosts. And when all seemed lost when great cities were razed and countless thousands butchered Operator #5 finally ignored restraining bureaucracy and pitted himself in a single-handed battle to wrest our nation from the Coolie Emperors bloody grasp! Go with crack Secret Service agent Jimmy Christopher as he meets the challenge of War-Masters from the Orient, torn from the pages of Operator #5 magazine, March 1936.