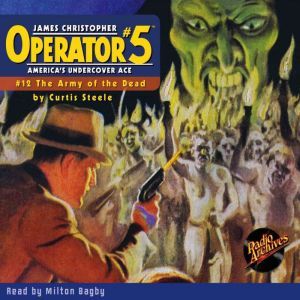 The news spread like wild-fire. A man had solved the problem of the ages he was bringing the dead back to life! Operator #5, ace of the American Secret Service, recognized the grave menace. He realized the danger if the gigantic advances of modern science were employed selfishly by unscrupulous men. And that precisely was the danger facing his native land! The Master of Death, using the promise of life everlasting, was cunningly building an army of fanatic, half-mad followers, men who were burning, pillaging and slaying at the will of the man-monster they worshipped! Go with crack Secret Service agent Jimmy Christopher as he meets the challenge of The Army of the Dead, torn from the pages of Operator #5 magazine, March 1935.