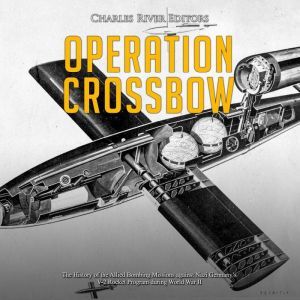 The British were only too aware of the dangers and potential of the Nazi rockets because the Nazi V-weapon bombardment of London and the south coast of England in 1944 and 1945 involved some of the most frightening attacks on civilians during the war. Not only did the V-1 missiles and V-2 rockets land unpredictably on civilian areas, causing damage and casualties, but they also represented the use of strange new technologies developed by Nazi scientists. After all, if the Nazis could design and develop rockets long before the Allied nations, perhaps they were also working on other, even more devastating new weapons.

To counter the V-weapons, the Allies implemented Operation Crossbow, which aimed to find ways to stop or at least reduce the number of V-weapons reaching their targets, and to reassure the population of Allied nations that these terrifying new weapons could be understood and overcome. The importance of Operation Crossbow was high enough that, despite being involved in massive military operations in Sicily and preparing for the Normandy landings, the Allies diverted manpower and resources to counter the V-weapon threat. This decision was made at the highest level, and those in charge were determined to ensure that Operation Crossbow would not fail.

Operation Crossbow: The History of the Allied Bombing Missions against Nazi Germany’s V-2 Rocket Program during World War II looks at one of the war’s most unique operations.