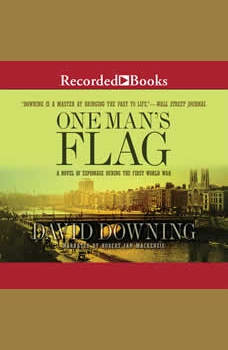 The follow-up to Jack of Spies, Soho's lead Spring '14 title. Jack McColl, a Scottish car salesman who moonlights as a spy for His Majesty's Navy, takes readers on an epic adventure across the world on the eve of World War One. India, 1915. Jack McColl is on a reconnaissance mission to better defend the British Empire against Bengali terrorists and their German allies. In England, meanwhile, Jack's former lover Caitlin Hanley witnesses the execution of her brother for a treasonous plot which Jack helped foil. His execution has only intensified Caitlin's involvement in the cause of Home Rule. An uprising in Dublin will bring Caitlin and Jack back together as lovers--and enemies. Follows the paperback release of Jack of Spies, as well as a specially commissioned and designed paperback reissue of all 6 of the Station series books. Primed by David Downing's upcoming first-ever US tour, getting him into more stores and augmenting his fan base. David Downing is not only one of Soho Crime's cult bestsellers, with sales of his Station series mushrooming every year, but also a critical darling. Set in a provocative moment in history and depicts the Irish Republican movement, the American suffrage movement, Indian uprisings against the British Raj, the rise of German antagonism, and other fascinating historical handles. Praise for Jack of Spies An IndieNext Selection A PW Top 10 Mysteries & Thrillers Pick A Library Journal Editor's Pick "[Downing] is a master at bringing the past to life through the careful and often loving observation of even minor players and through the artful deployment of specific detail."-- The Wall Street Journal "Moves along briskly and offers interesting facts about events now a century past . . . Always entertaining." --The Washington Post "I can already see Gerard Butler in the lead role of the film version." --Parade "[Downing ] is smart and erudite, with a knack for fully-rounded characters and atmospheric but unfussy prose . . . a ripping good tale." --The Seattle Times David Downing grew up in suburban London. He is the author of Jack of Spies, as well as six books in the John Russell espionage series, set in WWII Berlin: Zoo Station, Silesian Station, Stettin Station, Potsdam Station, Lehrter Station, and Masaryk Station. He lives with his wife, an American acupuncturist, in Guildford, England. Marketing and Publicity National publicity campaign with a focus on crime and fiction reviewers both print and digitally. The second in the series, ONE MAN'S FLAG will build on the success of JACK OF SPIES. Digital outreach through Facebook and Twitter. $100,000 marketing budget. Pre-publication digital/print advertising across trade venues. Multi-stage consumer digital/print advertising: One month out and on pub, commercial and mystery publication focus. 3 National market, consumer-facing, solo print ad, minimum. Featured galley at ALA Annual and BEA 2015. Espiongae targeted Facebook and AdWords advertising. Consumer-facing pre-pub galley distro via Goodreads. IndieBound White Box mailing.