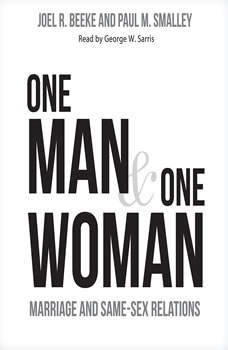 One Man and One Woman: Marriage and Same-Sex Relations

What does the Bible teach about sexual relationships between people of the same sex? Does true love require that we accept all forms of sexual expression? No, real love does not rejoice in sin, but rejoices in the truth. In the Bible, God reveals that He created gender, sex, and marriage, and we may not alter them at our will. Through His laws and works in history, God has made it clear that homosexual practices violate His holy purposes for mankind. The New Testament reaffirms God s created order and moral laws. It too warns that homosexual practice, like any other sin that we cherish, is the pathway to God s judgment. However, the Lord Jesus Christ saves sinners by His Spirit and gives them a new identity, forgiveness, life, and power to live according to His commandments. This is the message that all people need to hear: God's laws have not changed, but God's grace offers hope to sinners through Jesus Christ.

Table of Contents:
1. Foundations: Love, Authority, and Sexuality
2. Directions: God's Word to Ancient Israel about Homosexuality
3. Expectations: The Power of Sin and the Power of Christ
4. Conclusions: Grace and Truth

Over the past hundred years, scholars have attacked the historical truth of the Gospels and argued that they were originally anonymous and filled with contradictions. In The Case for Jesus, Brant Pitre taps into the wells of Christian scripture...

Lord, Have Mercy
by Scott Hahn

Best-selling author Scott Hahn has sold over 100,000 copies of his modern classic, The Lamb’s Supper. A deeply respected Catholic theologian and lecturer, Hahn is director of the Institute for Applied Biblical Studies. Here he crafts a pow...

National Bestseller! Pope Francis provides new insights into the most popular prayer in Christianity, offering readers a guide to living a life of meaning, purpose and strength.This new work by Pope Francis illuminates the most important prayer in a...

The Lamb's Supper
by Scott Hahn

As seen on EWTN with over 600,000 copies sold! Bestselling author Scott Hahn unveils the mysteries of the Mass, offering readers a deeper appreciation of the most familiar of Catholic rituals.Of all things Catholic, there is nothing that is so famil...

Two thousand years ago Jesus said, Follow me. What if the twenty-first-century church actually heeded that call? What would the world look like if the church were truly on the move? Simply put, very different. But these ponderings beg one more criti...

Written by G. K. Chesterton, Orthodoxy addresses foremost one main problem: How can we contrive to be at once astonished at the world and yet at home in it? Chesterton writes, "I wish to set forth my faith as particularly answering this double spiri...

One of the world's most recognized and loved spiritual leaders, Mother Teresa has inspired millions with her extraordinary example of compassionate and selfless work for the poor, the ill, and the outcast. Officially canonized as a saint in 2016, sh...

Scott Hahn is an internationally recognized Catholic lecturer and theologian. His books Hail, Holy Queen and Publishers Weekly bestseller The Lamb’s Supper began Hahn’s examination of the Catholic faith. With First Comes Love, he thou...

In the year since he was elected, Pope Francis simple message of mercy, service, and renewal has spread to every corner of the world. Through his gentle demeanor, selfless actions, and welcoming call for service to others, he has captured the attent...