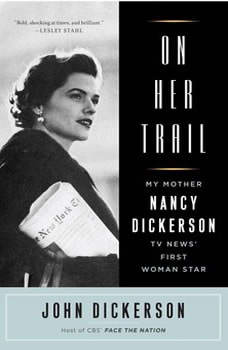 Before Barbara Walters, before Katie Couric, there was Nancy Dickerson. The first female member of the Washington TV news corps, Nancy was the only woman covering many of the most iconic events of the sixties. She was the first reporter to speak to President Kennedy after his inauguration and she was on the Mall with Martin Luther King Jr. during the march on Washington; she had dinner with LBJ the night after Kennedy was assassinated and got late-night calls from President Nixon. Ambitious, beautiful, and smart, she dated senators and congressmen and got advice and accolades from Edward R. Murrow. She was one of President Johnson's favorite reporters, and he often greeted her on-camera with a familiar "Hello, Nancy." In the '60s Nancy and her husband Wyatt Dickerson were Washington's golden couple, and the capital's power brokers coveted invitations to swank dinners at their estate on the Potomac. Growing up in the shadow of Nancy's fame, John Dickerson rarely saw his mother. This frank memoir—part remembrance, part discovery—describes a freewheeling childhood in which Nancy Dickerson was rarely around unless John was in trouble or she was throwing a party for the president and John was instructed to check the coats. By the time John was old enough to know what the news was, his mother was no longer in the national spotlight and he didn't see why she should be. He thought she was a liar and a phony. When he was fourteen, his parents divorced, and he moved in with his father. As an adult, John found himself in Washington, a reporter covering her old beat. A long-delayed connection between mother and son began, only to be cut short by Nancy's death in 1997. In her journals, letters, and yellowed newspaper clippings, John discovered the woman he never knew—an icon in television history whose achievement was the result of her relentless determination to reinvent herself and excel. On Her Trail is a fascinating picture of the early days of television and of Washington society at its most high-powered, and charts a son's honest and wry search for the mother he came to admire and love.