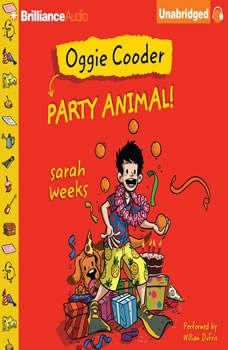 Oggie Cooder returns. . .this time showing what a party animal he can be (birthday party animal, that is)!Oggie Cooder has never set foot (or swim fin) in his neighbor Donnica Perfecto's swimming pool. But now he has his chance - it's Donnica's birthday, and her mom has forced her to invite Oggie to the pool party! Donnica, though, isn't about to let this happen. She has a plan to keep Oggie away. But what she doesn't count on is the power of Oggie's charving, an unexpected visit from a local rock band, a creative use of a cherry picker, a dog that tweets like a bird, and a boy in a bear suit whose identity will change everything when it's revealed.