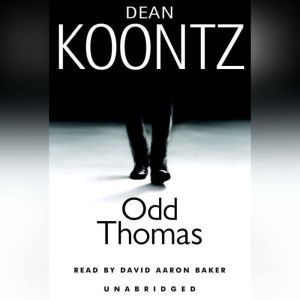 Meet Odd Thomas, the unassuming young hero of Dean Koontz’s dazzling New York Times bestseller, a gallant sentinel at the crossroads of life and death who offers up his heart in these pages and will forever capture yours.

“The dead don’t talk. I don’t know why.” But they do try to communicate, with a short-order cook in a small desert town serving as their reluctant confidant. Sometimes the silent souls who seek out Odd want justice. Occasionally their otherworldly tips help him prevent a crime. But this time it’s different.

A stranger comes to Pico Mundo, accompanied by a horde of hyena-like shades who herald an imminent catastrophe. Aided by his soul mate, Stormy Llewellyn, and an unlikely community of allies that includes the King of Rock ’n’ Roll, Odd will race against time to thwart the gathering evil. His account of these shattering hours, in which past and present, fate and destiny, converge, is a testament by which to live—an unforgettable fable for our time destined to rank among Dean Koontz’s most enduring works.

he used to be a good author but now his books are in such an annoying tone. i couldnt read this book, which is about a guy who sees ghosts. no more dean koontz books for me.

I found David Baker's narration to just about as good as it could be, given the fact that this is a first person account by a short order cook who hopes to sell tires someday, yet who is extraordinarily insigthtful, intelligent and articulate. There could be a cook in a diner in some desert town whose genius remains hidden, but I found it to be a little hard to believe. In any case, the story was both exciting and suspenseful and one that was quite touching in the end.

I really enjoyed this one. The story is more supernatural than pure horror and in that way, it reminds me of Koontz's early writing especially Lightning which was one of my favorites. Odd Thomas gave me everything a thriller should. It held my interest the whole way, dropping little plot twists and surprises like bread crumbs. My heart raced. I shed a tear in my coffee.