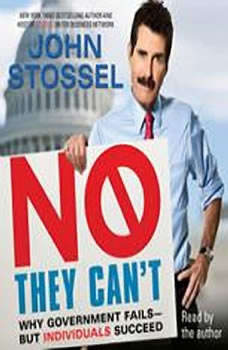 No, They Can't: Why Government Fails-But Individuals Succeed

New York Times bestselling journalist John Stossel shows how the expansion of government control is destructive for American society.Emmy Award-winning journalist John Stossel is a self-proclaimed skeptic, attacking society's sacred cows. Now, he dismantles the most sacred of them all: the notion that government action is the best way to solve a problem. From the myth that government can spend its way out of a crisis to the mistaken belief that labor unions protect workers, Stossel, a true libertarian, provides evidence that the reality is very different from what intuition tells us. His evidence leads to the taboo conclusions that: ·      Government already dominates health care—and that’s the problem·      The state keeps banning foods, but food bans don't make us healthier·      Government-run schools and teachers’ unions haven’t made kids smarterUtilizing his three decades in journalism, Stossel combines sharp insights, common sense, and documented facts to debunk conventional wisdom and challenge popular opinion about the role of our nation’s government.