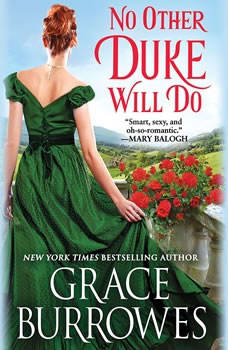 No Other Duke Will Do

"Smart, sexy, and oh-so-romantic." --Mary Balogh Julian St. David, Duke of Haverford, is barely keeping his head above water in a sea of inherited debts. Though he has a long-term plan to restore the family finances, his sister has a much faster solution: host a house party for London's single young ladies and find Julian a wealthy bride. Elizabeth Windham has no interest in marriage, but a recent scandal has forced her hand. As much as she'd rather be reading Shakespeare than husband-hunting, she has to admit she's impressed by Julian's protective instincts, broad shoulders, and, of course, his vast library. As the two spend more time together, their attraction is overwhelming, unexpected... and absolutely impossible. With meddling siblings, the threat of financial ruin, and gossips lurking behind every potted palm, will they find true love or true disaster? "Grace Burrowes is a romance treasure." -Tessa Dare The Windham Brides series: The Trouble with Dukes Too Scot to Handle No Other Duke Will Do A Rogue of Her Own

Too Scot to Handle
by Grace Burrowes

If the Viscount Falls
by Sabrina Jeffries

The heir presumptive to the Viscount Rathmoor, Dominick Manton once had his heart's desire within reach—a bright future as a barrister and engagement to Jane Vernon. Then a shattering betrayal by his vindictive brother George snatched away Dom...

No Other Duke Will Do
Windham Brides #3

The Trouble with Dukes
Windham Brides #1

Too Scot to Handle
Windham Brides #2