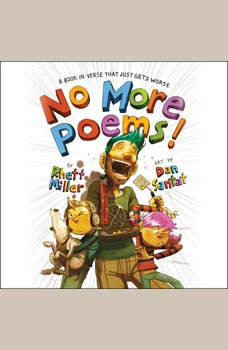 No More Poems!: A Book in Verse That Just Gets Worse

Acclaimed singer-songwriter Rhett Miller teams up with Caldecott Medalist Dan Santat in a riotous collection of irreverent poems for modern families. In the tradition of Shel Silverstein, these poems bring a fresh new twist to the classic dilemmas of childhood as well as a perceptive eye to the foibles of modern family life. Full of clever wordplay- and toilet humor to spare-- these twenty-three rhyming poems make for an ideal read-aloud experience. Taking on the subjects of a bullying baseball coach and annoying little brothers with equally sly humor, renowned lyricist Rhett Miller's clever verses will have the whole family cackling.

Classic Poems for Boys comprises a delightfully varied set of poems for 5-10-year olds. From rousing favourites like Felicia Dorothea Hemans’s Casabianca and John Keats’s A Song About Myself, to dreamy, thoughtful poems by Rudyard Kiplin...

Soul Looks Back in Wonder
by Various

"The selections are uniformly uplifting, with affirming messages about the heritage, strength and dreams of African Americans."—Publishers WeeklyA compelling collection of words, with the talents of thirteen major poets, including Maya Angelou...

I'm Just No Good at Rhyming
by Chris Harris

The instant New York Times bestseller featured on NPR's Weekend Edition with Scott Simon! B. J. Novak (bestselling author of The Book With No Pictures) described this groundbreaking poetry collection as "Smart and sweet, wild and wicked, brilliantl...

“Roald Dahl sometimes shared a tonal kinship with Ogden Nash, and he could demonstrate a verbal inventiveness nearly Seussian…[His] stories work better in audio than in print.” –The New York TimesREVOLTING RHYMES Did you thi...

Hate That Cat
by Sharon Creech

Return to Miss Stretchberry's class with Jack, the reluctant poet, who over the course of a year encounters new and challenging things like metaphors, alliterations, onomatopoeia, and one mean fat black cat!The Newbery Medal-winning author of Walk ...

From the legendary creator of Where the Sidewalk Ends, A Light in the Attic, Falling Up, and The Giving Tree comes an unforgettable new character in children's literature.Welcome to the world of Runny Babbit and his friends Toe Jurtle, Skertie Gunk...

The Stuff of Stars
by Marion Dane Bauer

In an astonishing unfurling of our universe, Newbery Honor winner Marion Dane Bauer and Caldecott Honor winner Ekua Holmes celebrate the birth of every child. Before the universe was formed, before time and space existed, there was . . . nothing. Bu...

Classic Poems for Girls is a collection of over 25 funny, whimsical and moving poems for 5–10-year olds, designed to fuel the imagination. From the adventures of the Jumblies, who sail away in a sieve, to the sticky end of a girl named Matilda...