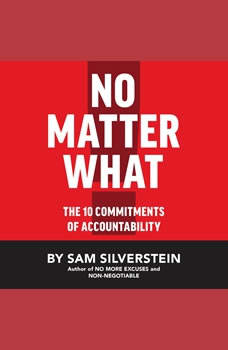 What if the secret to being your best, attracting people and leading people was merely knowing what, why and how to commit to people? All you have ever wanted was to have more meaningful relationships, attract others to your cause and be able to make a difference in the lives of the people around you. You can have all this and more when you harness the power of the commitment. No Matter What starts with a simple Yes that forms a commitment you make to yourself and to the people around you. You will discover that, No Matter What, you will be able to: Make your word your bond Know and live your values Help people be their very best Create a good reputation in a troubled world Develop and sustain sound financial principles No Matter What is simple, powerful and life changing. When you start right now you will be committing to a better future for yourself and the people around you, No Matter What! For over 25 years, Sam Silverstein has helped people and organizations be the very best they can be. Sam will share the truth of what accountability is, why it is the most powerful change agent in existence and how you can harness the power of commitment in 10 specific and defining areas. Sam has worked with companies, government agencies and individuals around the world helping them create their best possible self through the power of accountability. Thousands of people have put Sam's philosophies and tools to work as they have grown and prospered.