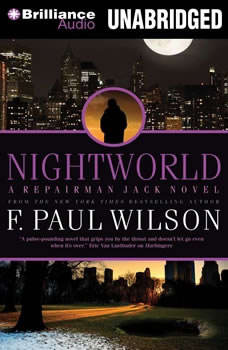 “Repairman Jack has got to be one of the greatest characters ever.... When all things start pointing to the end of humanity, Jack’s the guy to turn to.” - RT Book Reviews on Fatal Error The end of the world begins at dawn, when the sun rises later than it should. Then the holes appear. The first forms in Central Park, within sight of an apartment where Repairman Jack and a man as old as time watch with growing dread. Gaping holes, bottomless and empty… until sundown, when the first unearthly, hungry creatures appear. Nightworld brings F. Paul Wilson’s Adversary Cycle and Repairman Jack saga to an apocalyptic finale as Jack and Glaeken search the Secret History to gather a ragtag army for a last stand against the Otherness and a hideously transformed Rasalom.