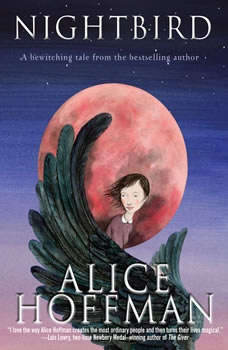 Bestselling author Alice Hoffman’s bewitching Nightbird is perfect for ages 10-13: love and friendship empower a lonely girl to embrace her uniqueness and discover her strengths.

Twig lives in Sidwell, where people whisper that fairy tales are real. After all, her town is rumored to hide a monster. And two hundred years ago, a witch placed a curse on Twig’s family that was meant to last forever. But this summer, everything will change when the red moon rises. It’s time to break the spell.

“Hoffman reminds us that there are secrets everywhere . . . Nightbird soars.”
—The New York Times

“Alice Hoffman has a gift for melding magic and realism in a way that makes nearly anything seem possible.”
—Shelf Awareness, Starred

“The mix of romance and magic is irresistible.”
—Kirkus Reviews

What Other Authors Are Saying
“I love the way Alice Hoffman creates the most ordinary people and then turns their lives magical. . . . [Nightbird] is like reentering a wonderful dream that you vaguely remember.” —Lois Lowry, two-time Newbery Medal–winning author of The Giver

The Dragon in the Sock Drawer
by Kate Klimo

For Magic Tree House readers who are ready for something longer, the Dragon Keepers series has the perfect length and reading level, along with the fast-paced writing, adventure, and sense of teamwork that kids love to read.Ten-year-old cousins Jess...

The Sasquatch Escape
by Suzanne Selfors

When Ben Silverstein is sent to the rundown town of Buttonville to spend the summer with his grandfather, he's certain it will be the most boring vacation ever. That is, until his grandfatherA¹s cat brings home what looks like . . . a baby dra...