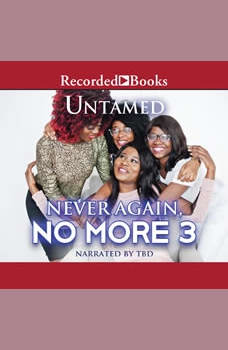 In part 3 of the Never Again…No More series, Trinity, LaMeka, Lucinda and Charice are back with brand new drama. Although they seem to have escaped their pasts, they find out they can never say never again. Trinity living the high life and loving it as a wife, a mother, a student and a career woman. But she has a past. A past named…Pooch…After barely escaping the death grip Tony had over her, LaMeka’s life is truly coming full circle, but her sordid past is not that far of a distant memory but then again neither is Tony…Weathering storms is one battle Lucinda is used to, but after she falls in love with Aldris, his past gets U.S. mailed to their front doorstep, she finds out weathering the storm isn’t the problem…it’s surviving it…After the loss of Charity, Charice and Ryan moved on…together. It is a marriage of pure love and pure bliss until Lincoln shows up at their door determined to prove that it is a marriage of pure lies. Slowly but surely this twisted game of cat and mouse begins to unravel and proves no one is as they seem. As the follow-up to Never Again…No More II, this book explodes on secrets and lies that begin unraveling from one character to the next and showcases what goes around…truly comes around again.

Something On the Side
by Carl Weber

The Business of Lovers
by Eric Jerome Dickey

By Candlelight
by Janelle Taylor