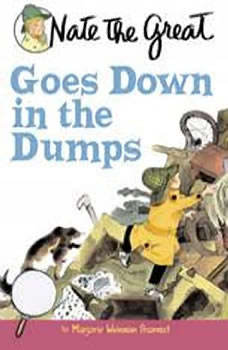 Nate the Great Goes Down in the Dumps

Join the world’s greatest detective, Nate the Great, as he solves the mystery of the missing money box! Perfect for beginning readers and the Common Core, this long-running chapter book series will encourage children to problem-solve with Nate, using logical thinking to solve mysteries!

CAN NATE CLEAN UP THE CASE?

Nate the Great’s friend Rosamond has started a future-telling business, but her money box is missing. Nate and his dog, Sludge, visit Claude, who helped Rosamond set up her business, and Finley, who collects boxes for his rat, but they can’t seem to help. It looks like the only way to clean up this case is to get down and dirty in the dumps!

Praise for the Nate the Great Series

★ “Kids will like Nate the Great.” —School Library Journal, Starred

“Nate, Sludge, and all their friends have been delighting beginning readers for years.” —Kirkus Reviews

“They don’t come any cooler than Nate the Great.” —The Huffington Post