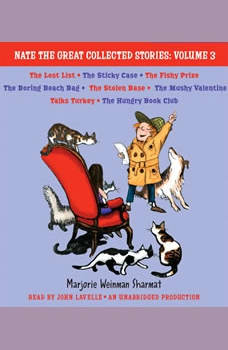 New on CD is the third collection of classic stories from Nate the Great and his trusty companion Sludge.

Lost List
When Nate’s friend Claude’s grocery list is lost, Nate sets out to find it before lunch.

Sticky Case
A stegosaurus stamp belonging to Nate’s friend Claude disappears, and the indomitable Nate the Great is called in on the case.

Fishy Prize
When the prize for the smartest pet contest disappears, it’s up to Nate and his dog, Sludge, to find the prize.

Boring Beach Bag
Oliver’s boring blue beach bag is gone and Nate is on the case!

Stolen Base
Second base has gone missing. Nate’s hunt leads him to some strange places before he finds himself up at bat.

Mushy Valentine
There is a big red paper heart taped to Sludge’s doghouse and Nate sets out to find who the valentine is from.

Talks Turkey
A giant turkey is on the loose! This case is too big for just one detective. Nate, Claude, Olivia and Sludge set out to catch the turkey.

Hungry Book Club
There is an evil monster on the loose ripping pages out of books. Nate looks to the book club, book sale and librarian for clues.