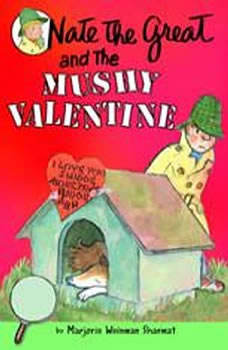 Nate the Great and the Mushy Valentine

Nate the Great hates mushy stuff. He spies a big red paper heart taped to Sludge’s doghouse. Who left Nate’s dog a secret valentine? Nate will solve the case, and then there will be no more mushy stuff. At least that’s what he thinks. . . .

“Nate makes a great narrator, his clipped prose mimicking that of the hard-boiled detective genre, providing short, simple sentences for beginning readers, and setting up the deadpan humor. Simont's expressive drawings, tinted with watercolor washes, illustrate the characters and the action with finesse and restraint. A most appealing choice.”—Booklist, Boxed Review

New on CD is the third collection of classic stories from Nate the Great and his trusty companion Sludge.Lost ListWhen Nate’s friend Claude’s grocery list is lost, Nate sets out to find it before lunch. Sticky CaseA stegosaurus stamp bel...

Pete the Cat: Valentine's Day Is Cool
by James Dean

Suzy Kline’s zany Horrible Harry books continue to delight young readers. The 25th entry in the series finds Harry once again up to his ears in problems. Harry has an overdue library book and a classmate just won’t stop calling him names...

Nate the Great and the Lost List
by Marjorie Weinman Sharmat

These chapter books introduce beginning readers to the detective mystery genre. Perfect for the Common Core, kids can problem-solve with Nate, using logical thinking to solve mysteries! Although Nate the Great and his dog, Sludge, are on vacati...

Dreidels on the Brain
by Joel ben Izzy

At last a great American Hanukkah story! This very funny, very touching novel of growing up Jewish has the makings of a holiday classic.One lousy miracle.  Is that too much to ask?Evidently so for Joel, as he tries to survive Hannukah, 1971 in ...

Ballpark Mysteries #9: The Philly Fake
by David A. Kelly

It's the ninth inning! The Philly Fake is book #9 in our early chapter book mystery series, where each book is set in a different American ballpark!What better city to spend the Fourth of July than Philadelphia? For Mike and Kate, the holiday is all...

Nate the Great and the Halloween Hunt
by Marjorie Weinman Sharmat

Perfect for beginning readers looking for a Halloween chapter book! Kids can problem-solve with Nate, the world's greatest detective, using logical thinking to solve mysteries! It is Halloween night, and all the kids are dressed up to go t...

On Valentine’s Day, SpongeBob makes the biggest, sweetest valentine ever for his best friend, Patrick. But when a herd of chocolate-eating scallops threaten the valentine’s arrival, SpongeBob has to come up with a new plan. Can SpongeBob...

After reading in the newspaper that it's Valentine's Day, Mr. Goat sets out in search of very special gifts for his first love. But what gifts can a goat choose to perfectly show how he feels? Everyone will be in for a great surprise when they hear ...