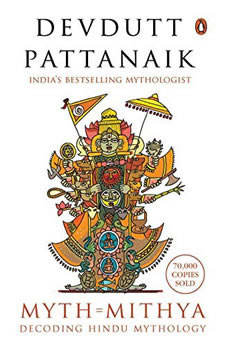 Hindus have one God. They also have 330 million gods: male gods; female gods; personal gods; family gods; household gods; village gods; gods of space and time; gods for specific castes and particular professions; gods who reside in trees; in animals; in minerals; in geometrical patterns and in man-made objects. Then there are a whole host of demons. But no Devil. In this groundbreaking book Dr Devdutt Pattanaik; one of India’s most popular mythologists; seeks an answer to these apparent paradoxes and unravels an inherited truth about life and death; nature and culture; perfection and possibility. He retells sacred Hindu stories and decodes Hindu symbols and rituals; using a unique style of commentary; illustrations and diagrams. We discover why the villainous Kauravas went to heaven and the virtuous Pandavas (all except Yudhishtira) were sent to hell; why Rama despite abandoning the innocent Sita remains the model king; why the blood-drinking Kali is another form of the milk-giving Gauri; and why Shiva wrenched off the fifth head of Brahma. Constructed over generations; Hindu myths serve as windows to the soul; and provide an understanding of the world around us. The aim is not to outgrow myth; but to be enriched and empowered by its ancient; potent and still relevant language."