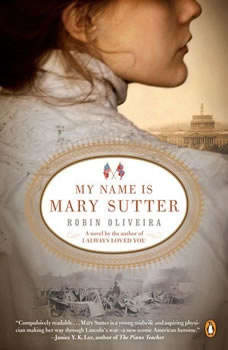 My Name Is Mary Sutter

In this stunning historical novel, Mary Sutter is a brilliant, headstrongmidwife from Albany, New York, who dreams of becominga surgeon. Determined to overcome the prejudices against womenin medicineâ€”and eager to run away from her recent heartbreakâ€”Mary leaves home and travels to Washington, D.C. to help tendthe legions of Civil War wounded. Under the guidance of WilliamStipp and James Blevensâ€”two surgeons who fall unwittingly inlove with Maryâ€™s courage, will, and stubbornness in the face ofsufferingâ€”and resisting her motherâ€™s pleas to return home to helpwith the birth of her twin sisterâ€™s baby, Mary pursues her medicalcareer in the desperately overwhelmed hospitals of the capital.Like Charles Frazierâ€™s Cold Mountain and Robert Hicksâ€™s TheWidow of the South, My Name Is Mary Sutter powerfully evokesthe atmosphere of the period. Rich with historical detail (includingmarvelous depictions of Lincoln, Dorothea Dix, GeneralMcClellan, and John Hay among others), and full of the tragediesand challenges of wartime, My Name Is Mary Sutter is an exceptionalnovel. And in Mary herself, Robin Oliveira has created atruly unforgettable heroine whose unwavering determination andvulnerability will resonate with readers everywhere.

The national bestselling hit hailed by the New York Times as a "vibrant medieval mystery...[it] outdoes the competition." In medieval Cambridge, England, Adelia, a female forensics expert, is summoned by King Henry II to investigate a series of gru...

A Reliable Wife
by Robert Goolrick

Robert Goolrick’s riveting debut novel is both foreboding and sensual. When a wealthy man first meets his mail-order bride in 1907, he realizes this statuesque beauty is anything but a “simple missionary’s daughter.” But he d...

Paris, July 1942: Sarah, a ten year-old girl, is brutally arrested with her family by the French police in the Vel' d'Hiv' roundup, but not before she locks her younger brother in a cupboard in the family's apartment, thinking that she will be back ...

Year of Wonders
by Geraldine Brooks

An unforgettable tale of a brave young woman during the plague in 17th century England from the author The Secret Chord and of March, winner of the Pulitzer Prize.  When an infected bolt of cloth carries plague from London to an isolated v...

The Orchardist
by Amanda Coplin

Hotel on the Corner of Bitter and Sweet
by Jamie Ford

"Sentimental, heartfelt….the exploration of Henry’s changing relationship with his family and with Keiko will keep most readers turning pages...A timely debut that not only reminds readers of a shameful episode in American history, ...