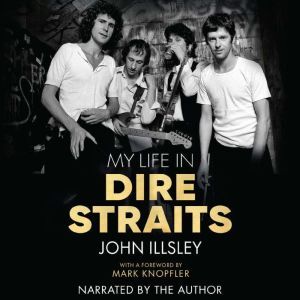 My Life in Dire Straits: The Inside Story of One of the Biggest Bands in Rock History

The first, and only, inside story of one of the greatest bands in rock history?Dire Straits?as told by founding member and bassist John Illsley One of the most successful music acts of all time, Dire Straits filled stadiums around the world. Their albums sold hundreds of millions of copies and their music?classics like “Sultans of Swing,” “Romeo and Juliet,” “Money for Nothing,” and “Brothers in Arms”?is still played on every continent today. There was, quite simply, no bigger band on the planet throughout the eighties. In this powerful and entertaining memoir, founding member John Illsley gives the inside track on the most successful rock band of their time. From playing gigs in the spit-and-sawdust pubs of south London, to hanging out with Bob Dylan in LA, Illsley tells the story of the band with searching honesty, soulful reflection, and wry humor. Starting with his own unlikely beginnings in Middle England, he recounts the band’s rise from humble origins to the best-known venues in the world, the working man’s clubs to Madison Square Garden, sharing gigs with wild punk bands to rocking the Live Aid stage at Wembley. And woven throughout is an intimate portrait and tribute to his great friend Mark Knopfler, the band's lead singer, songwriter, and remarkable guitarist. Tracing an idea that created a phenomenal musical legacy, an extraordinary journey of joy and pain, companionship and surprises, this is John Illsley’s life in Dire Straits. Levon Helm claimed that his drum stool was the best seat in the house. From that vantage point back in his childhood home of Turkey Scratch, Arkansas, he saw the convergence of musical styles—blues, country, and R&B—that would coalesce into rockabilly and then rock. Later, he became integral to the evolution of popular music, joining the raucous rockabilly group Ronnie Hawkins and the Hawks, then merging hard-driving rock with Bob Dylan’s folk roots, and revolutionizing American rock with the Band. He not only provided the perfect “in the pocket” rhythm and unforgettable high-lonesome voice for many of the Band’s greatest songs, but he was also the Band’s soul. While performing as one of the premier drummers of modern music, Helm sang the anthems of a generation: “The Night They Drove Old Dixie Down,” “Up on Cripple Creek,” “Rag Mama Rag, “Life Is a Carnival,” and “The Weight.” As a member of the Band, Levon was inducted into the Rock and Roll Hall of Fame and received the Grammy’s Lifetime Achievement Award. He also acted in eighteen movies, including Coal Miner’s Daughter and The Right Stuff. Universally loved and admired, he was described by Bob Dylan as “my bosom buddy friend to the end, one of the last true great spirits of my or any other generation.” Diversion will publish LEVON on June 2, 2020. We see the audience for this book being the same readers who loved Testimony by Robbie Robertson and Small Town Talk by Barney Hoskyns. The manuscript and ARC cover are attached, and I look forward to hearing your thoughts. All the best, Ashley “Sandra Tooze has not only written the definitive biography of Levon Helm, but she’s also written an outstanding life-story of modern American music, encompassing all of the colorful characters that Levon Helm met along the way. Levon embodied the evolution of blues, rockabilly, country and folk that meant so much to so many, defined the soundtrack of my life, and inspired a generation. Levon Helm was a musician’s musician. This book is a must-read musical odyssey of a true hero of rock and roll.” ?Steve Katz, founding member of Blood, Sweat, and Tears; author of Blood, Sweat, and My Rock ‘n’ Roll Years