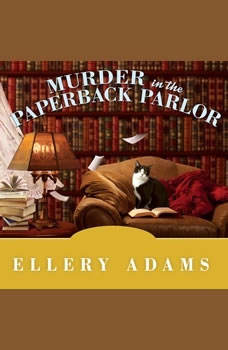 Murder in the Paperback Parlor

With Valentine's Day just around the corner, Jane Steward is organizing a week of activities for fans of love stories at her book-themed resort. But her Regency readers barely have time to brush up on their Jane Austen before tragedy strikes Storyton Hall. Rosamund York, one of the most celebrated authors in attendance, is killed. Rosamund had as many enemies as she did admirers, including envious fellow novelists, a jealous former lover, and dozens of angry fans. It's up to Jane, with the help of her book club, the Cover Girls, to catalogue the list of suspects and find a heartless killer quickly—before the murderer writes someone else off.

Murder on the Half Shelf
by Lorna Barrett

The town of Stoneham is a haven for bookstores, but it is sadly lacking in bed-and-breakfasts. Fortunately Pippa and Jon Comfort's Sheer Comfort Inn is about to open, and the couple has offered some locals a free night as a trial run. But it won't...

Ella Mae LeFaye's Charmed Pie Shoppe is wildly popular in Havenwood, Georgia, which is not surprising since Ella Mae can lace her baked goods with enchantments. The shop's extraordinary success seems destined to continue when Ella Mae meets an engag...

Pies and Prejudice
by Ellery Adams

When the going gets tough, Ella Mae LaFaye bakes pies. So when she catches her husband cheating in New York, she heads back home to Havenwood, Georgia, where she can drown her sorrows in fresh fruit filling and flaky crust. But her pies aren't just ...

Due or Die
by Jenn McKinlay

Answering tricky reference questions is excitement enough for library director Lindsey Norris. Until a murder is committed in her cozy hometown of Briar Creek, Connecticut, and the question of who did it must be answered before someone else is check...

THE NEW YORK TIMES BESTSELLING LIBRARY LOVER'S MYSTERY FROM THE AUTHOR OF DUE OR DIE“Avast” in pirate speak means what?*Answering tricky reference questions like this one provides plenty of excitement for library director Lindsey Norris....

Murder in the Mystery Suite
by Ellery Adams

Tucked away in the rolling hills of rural western Virginia lies the storybook resort of Storyton Hall, catering to book lovers who want to get away from it all. To increase her number of bookings, resort manager Jane Steward has decided to host a Mu...