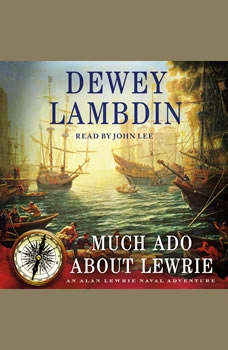 Much Ado About Lewrie: An Alan Lewrie Naval Adventure

The twenty-fifth title in Dewey Lambdin's beloved series of historical naval adventure. Lewrie loses his ship and his command when he receives news that Vigilance must return to England to be decommissioned and turned over to the dockyards for a complete refit. Lewrie is grounded, put on half-pay, and his crew disperses to look for new positions.It's late Autumn, and being ashore is heavenly, after a time. Lewrie spends time with his wife Jessica, helps his son Hugh find a new ship, and happily marries off Charlotte. Life onshore is quiet until Lewrie finds himself once again in the headlines of the city papers after discovering a dognapping gang and uncovering stolen Bisquits and Rembrants. The headlines should be positive, but soon the tides turn against Lewrie once again. There's never a dull moment for Lewrie.Dewey Lambdin is the reigning master of maritime fiction, celebrated as the heir to Patrick O'Brian and C.S. Forester. For over twenty years, his devoted fans have followed the adventures of Alan Lewrie, Royal Navy, from his days as a midshipmen to captain of his own ship and, though on somewhat dubious grounds, a baronetcy.