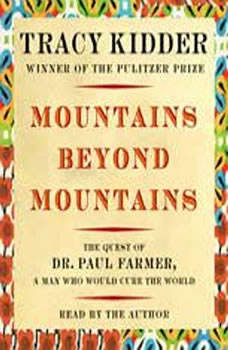 “[A] masterpiece . . . an astonishing book that will leave you questioning your own life and political views . . . Kidder opens a window into Farmer’s soul, letting the reader peek in and see what truly makes the good doctor tick.”—Nicholas Thomas, USA Today

In medical school, Paul Farmer found his life’s calling: to cure infectious diseases and to bring the lifesaving tools of modern medicine to those who need them most. Tracy Kidder’s magnificent account shows how one person can make a difference in solving global health problems through a clear-eyed understanding of the interaction of politics, wealth, social systems, and disease. Profound and powerful, Mountains Beyond Mountains takes us from Harvard to Haiti, Peru, Cuba, and Russia as Farmer changes people’s minds through his dedication to the philosophy that “the only real nation is humanity.”

Praise for Mountains Beyond Mountains

“A true-to-life fairy tale, one that inspires you to believe in happy endings . . . Its stark sense of reality comes as much from the grit between the pages as from the pure gold those pages spin.”—Laura Claridge, Boston Sunday Globe

“Stunning . . . Mountains Beyond Mountains will move you, restore your faith in the ability of one person to make a difference in these increasingly maddening, dispiriting times.”—John Wilkens, The San Diego Union-Tribune

“Easily the most fascinating, most entertaining and, yes, most inspiring work of nonfiction I’ve read this year.”—Charles Matthews, San Jose Mercury News

“It’ll fill you equally with wonder and hope.”—Cathy Burke, People

“In this excellent work, Pulitzer Prize-winner Kidder immerses himself in and beautifully explores the rich drama that exists in the life of Dr. Paul Farmer. . . . Throughout, Kidder captures the almost saintly effect Farmer has on those whom he treats.”—Publisher’s Weekly (starred review)

“[A] skilled and graceful exploration of the soul of an astonishing human being.”—Kirkus Reviews (starred review)

Dreams from My Father
by Barack Obama

In this lyrical, unsentimental, and compelling memoir, the son of a black African father and a white American mother searches for a workable meaning to his life as a black American. It begins in New York, where Barack Obama learns that his father&md...

In this very special collection of favorite stories about dogs great and small, James Herriot tells us about his own dogs and all the wonderful people and animals we have come to love so much. Fifty memorable tales move us to both laughter and tears...