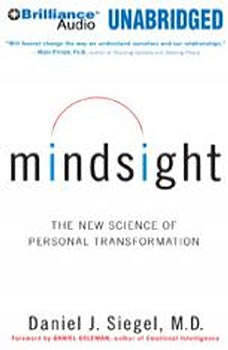 • Is there a memory that torments you, or an irrational fear you can’t shake? • Do you sometimes become unreasonably angry or upset and find it hard to calm down?• Do you ever wonder why you can’t stop behaving the way you do, no matter how hard you try?• Are you and your child (or parent, partner, or boss) locked in a seemingly inevitable pattern of conflict?What if you could escape traps like these and live a fuller, richer, happier life? This isn’t mere speculation but the result of twenty-five years of careful hands-on clinical work by Daniel J. Siegel, M.D. A Harvard-trained physician, Dr. Siegel is one of the revolutionary global innovators in the integration of brain science into the practice of psychotherapy. Using case histories from his practice, he shows you how to focus your attention on the internal world of the mind in a way that will literally change the wiring and architecture of your brain.An audiobook as inspiring as it is informative, as practical as it is profound, Mindsight offers exciting new proof that we aren’t hardwired to behave in certain ways but instead have the ability to harness the power of our minds to resculpt the neural pathways of our brains in ways that will be life-transforming.