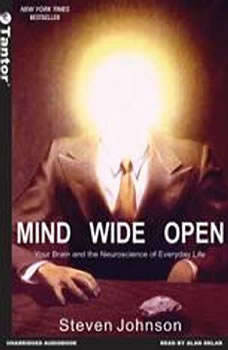 Mind Wide Open: Your Brain and the Neuroscience of Everyday Life

BRILLIANTLY EXPLORING TODAY'S CUTTING-EDGE BRAIN RESEARCH, MIND WIDE OPEN IS AN UNPRECEDENTED JOURNEY INTO THE ESSENCE OF HUMAN PERSONALITY, ALLOWING READERS TO UNDERSTAND THEMSELVES AND THE PEOPLE IN THEIR LIVES AS NEVER BEFORE. Using a mix of experiential reportage, personal storytelling, and fresh scientific discovery, Steven Johnson describes how the brain works — its chemicals, structures, and subroutines — and how these systems connect to the day-to-day realities of individual lives. For a hundred years, he says, many of us have assumed that the most powerful route to self-knowledge took the form of lying on a couch, talking about our childhoods. The possibility entertained in this book is that you can follow another path, in which learning about the brain's mechanics can widen one's self-awareness as powerfully as any therapy or meditation or drug. In Mind Wide Open, Johnson embarks on this path as his own test subject, participating in a battery of attention tests, learning to control video games by altering his brain waves, scanning his own brain with a $2 million fMRI machine, all in search of a modern answer to the oldest of questions: who am I? Along the way, Johnson explores how we "read" other people, how the brain processes frightening events (and how we might rid ourselves of the scars those memories leave), what the neurochemistry is behind love and sex, what it means that our brains are teeming with powerful chemicals closely related to recreational drugs, why music moves us to tears, and where our breakthrough ideas come from. Johnson's clear, engaging explanation of the physical functions of the brain reveals not only the broad strokes of our aptitudes and fears, our skills and weaknesses and desires, but also the momentary brain phenomena that a whole human life comprises. Why, when hearing a tale of woe, do we sometimes smile inappropriately, even if we don't want to? Why are some of us so bad at remembering phone numbers but brilliant at recognizing faces? Why does depression make us feel stupid? To read Mind Wide Open is to rethink family histories, individual fates, and the very nature of the self, and to see that brain science is now personally transformative — a valuable tool for better relationships and better living.n the country...

The Prince (1532) is a treatise that systematically charts the best strategies for successful governing. It unapologetically places realism above idealism, showing would-be kings how to get what they want while appearing to be generous and honourabl...

"Fascists," "Brownshirts," "jackbooted stormtroopers"—such are the insults typically hurled at conservatives by their liberal opponents. Calling someone a fascist is the fastest way to shut them up, defining their views as beyond the political...

One of the most significant books ever written by a head of State, the Meditations are a collection of philosophical thoughts by the Emperor Marcus Aurelius (121–180 ce). Covering issues such as duty, forgiveness, brotherhood, strength in adve...