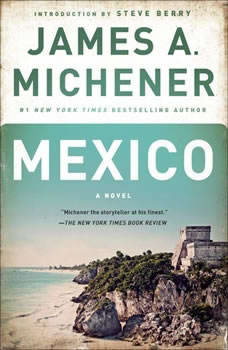 Pulitzer Prize–winning author James A. Michener, whose novels hurtle from the far reaches of history to the dark corners of the world, paints an intoxicating portrait of a land whose past and present are as turbulent, fascinating, and colorful as any other on Earth. When an American journalist travels to report on the upcoming duel between two great matadors, he is ultimately swept up in the dramatic story of his own Mexican ancestry—from the brilliance and brutality of the ancients, to the iron fist of the invading Spaniards, to modern Mexico, fighting through dust and bloodshed to build a nation upon the ashes of revolution. Architectural splendors, frenzied bullfights, horrific human sacrifice: Michener weaves them all into an epic human story that ranks with the best of his beloved bestselling novels.

“Michener the storyteller at his finest . . . There are splendid and authentic scenes in the plaza de toros that are as dramatic as any written by Ernest Hemingway or Barnaby Conrad.”—The New York Times Book Review

“An enthralling story . . . Michener artfully combines the history of Mexico with the art of bullfighting, teaching the reader about both and telling a grand story at the same time.”—St. Louis Post-Dispatch

“A novel of epic proportions, abounding in visual and historical detail.”—Richmond Times-Dispatch